I work with folks that have really big challenges with hoarding. I’ve been called in by various local agencies to help folks that need to clean up their properties to code or lease agreement. Or they end up homeless or evicted. 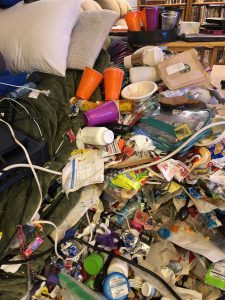 Cleaning one’s environment up to others. specifications, when one has a serious mental health disorder such as

hoarding is not something you can reasonably expect to happen easily.

Especially when it comes to family wanting to come in & help clean it all up. The picture to your right is from my client’s son Matt’s bedroom. Their son is in his early 30’s. Because he has serious mental health disorders (hoarding being one of them), he’s had a hard time getting & holding onto a full-time job in his field of engineering. So, he works part-time & spends his free time gaming. He also spends some of that time throwing his garbage all over the areas he occupies in the upstairs of his parent’s luxury home. He’s trashed that entire space, literally.

What you see in the picture is trash that is as high as Matt’s bed. He walks on the trash to get to his bed. When on his bed, he launches his garbage on either side, so he’s made two mountains of trash alongside of himself. Are you asking how he sleeps in all that trash? He tells me he sleeps just fine. Okay, if you say so.

When we started our work together, Matt & I had to shovel the trash out of his bedroom suite, which consists of open office space, a large bathroom & two large walk-in closets. Along with a guest room suite, which he also trashed. Suffice it to say as we’ve been working we’ve found a lot of missing stuff, like jewelry, his passport, other important papers, clothing, expensive sneakers & shoes, lots & lots of electronics including laptops, iPhones, iPads, all manner of gaming devices & many other things that he’d been looking for. Treasure hunt!

Matt’s parents called me in to work with him, after they gave him the final ultimatum of “start working with Randi to clean this up, let her help you & get started NOW or you find a new place to live in one month, no joke!”

Well, here’s the challenge when a third party (Matt’s parents) calls me to work with a client (Matt) &, that client wasn’t the one motivated on his own to call, cause he wanted to make changes. His parents wanted this for him. That means this client usually wouldn’t want to do the work it takes to make these difficult behavioral changes. They aren’t motivated to do the work or keep up with the maintenance needed to sustain the changes made. But in this case, Matt’s parents were ready to throw him out, so in his desperation, he said he’d do whatever he had to do to stay living with them.

So, we started working & he’s made significant strides. We met with his mental health team a number of times. We put a number of  “Matt friendly” processes in place like placing large trash cans strategically throughout the living space, especially on either side of his bed, that he could use instead of the floor. Then “throw the garbage out when the can is filled” rule that he agreed to follow. Once we established ground rules & a number of other strategies that would work for him, we were on our way towards change.

Matt’s now throwing his trash away in the trash cans. This is a huge behavioral change. He’s also taking care of his personal belongings. He feels so much better about himself. His health is better in so many ways. He can breathe easier & he admits that he really sleeps better now. He gets along better with his parents & he gets to live with them as long as he maintains his living environment.

Of course, there’s no cure for this mental health disorder. But there is clutter management & that’s where Matt is, managing each & every day. It’s tough work, but he’s promised himself & others that he will do what works best for him & he sees this as working. “Slow & steady won the race” is what I say.

If you’re interested in reading some more interesting stories about folks with hoarding disorders, here’s one from the new season of the hit TV show Hoarders- https://www.realtor.com/advice/home-improvement/worst-hoarders-house/