Being left-handed in a right-handed world 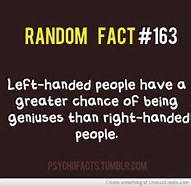 There are lots of made-up holidays, but I really like “International Left-Handed Day” which occurred on August 13th.

In a world of right-handedness, us lefties stick out like a sore left thumb. We live in a world were we’re represented by 10 to 13.5% of the population.

As a left-handed person I’ve always felt different and special. My parents and three brothers are right-handed, so that was the first thing that made me special. I was also the only girl, second special thing. Lastly, I was the only organized person, bingo, need I say more. Well, you might hear me brag about these three facts many more times, can’t say for sure where or when.

Back to being left-handed. My Mom’s mother was a lefty, so she could teach me to tie my shoes. But, she couldn’t prepare me for a world designed for right-handed people. Us lefties have had to adapt, and for me, I’m neural handed in may ways. I use my right hand for many tasks, and can also switch hands comfortably when tasking. This is attributed to the way my brain is wired, as well as the fact that I’ve been forced by the  right-handed majority to be ambidextrous. 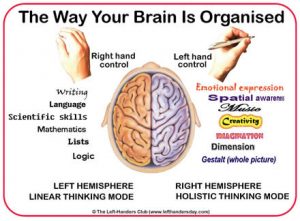 Another practice I have that a right-handed person would’t, is that when I see someone using their left hand to write or eat, I also comment to them how cool it is to be left-handed. Always produces a smile and knowing nod.

I’ve heard throughout my life that left-handed people are more creative and right-handers more logical. Well as stated below, modern research has shown that this theory might not be accurate.

“Recent developments in neuroscience indicate that the traditional right-brain/left-brain dichotomy is simplistic at best anyway, and that the brain’s connections and processes are actually much more complex (and also less hemisphere-dependent) than was previously thought. Thus, it is a gross simplification to talk of the “creative” right brain and the “logical” left brain (and thereby impute creativity to the left-hander and logic to the right-hander). Modern neurology has shown that elements of such characteristics exist in both sides of the brain, and that most tasks require the cooperation of both hemispheres. Also, the plasticity of the brain (its ability to “re-wire” its neural connections, as in the case of brain injuries, for example) is more than capable of overcoming any localized deficiency or superfluity of functionality.”

When it comes to brain injuries, I’m an expert from first hand experience. So it’s true in my experience that with certain brain injuries (and all are different), that the plasticity of the brain is critical in regaining the ability of using that dominant hand. In the case where the injury has damaged the dominant side of the brain so much that the person has to relearn everything, that has to be incredibly hard for recovery and living their new life post-brain injury.

Another source I read was an article originally published on  The Conversation. It’s titled “Left handed people are more likely to be geniuses.”

One excerpt I thought quite important to this discussion was the different experiments  carried out with 2,300 students.

“”Handedness is just an indirect expression of brain function. For example, only a third of the people with a more developed right hemisphere are left-handed. So plenty of right-handed people will have a similar brain structure as left-handers. Consequently, we need to be cautious in interpreting people’s hand preference – whether we see it as a sign of genius or a marker for cognitive impairment.”

Well, I sure used the right side of my brain to find and read some cool research on some of the ways my brain and handedness work. So, take your dominant right hand and give use lefties a high five for our skill in adapting to this right-handed world.

Wait, I can’t end this blog without adding this: You know the old says that us left-handers are in our right minds! 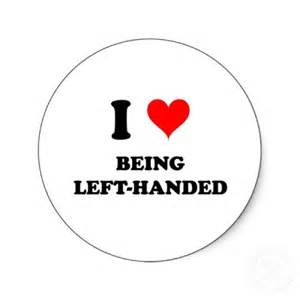